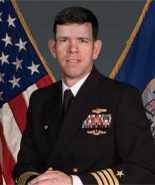 A native of Washington state, Gainer received his commission upon graduation from Northwestern University and entered the Navy’s nuclear propulsion and submarine training program. After 12 years in the submarine force, he transferred to the Information Professional (IP) Officer community in 2007. He holds a master’s degree in information technology management from the University of Maryland.

Gainer’s shore assignments include a variety of divisional and departmental leadership positions. In 2004, he reported to Commander, Submarine Group Eight in Naples, Italy, as the Deputy Operations Officer and Senior Watch Officer. He remained in Naples as the first Navy Europe Plans and Operations Executive Officer in the combined U.S. Sixth Fleet/Naval Forces Europe staff. Then, as a new IP, he reported as Commander, U.S. Third Fleet Information Management officer, where he helped develop the Maritime Operations Center (MOC) concept. In May 2013, he reported to the NIWC Pacific Program Executive Office for C4I, where he supervised development and acquisition of shore- based tactical networks.