Where Are They Now? Civil Engineering Alumni Highlight: Carlos Gonzalez 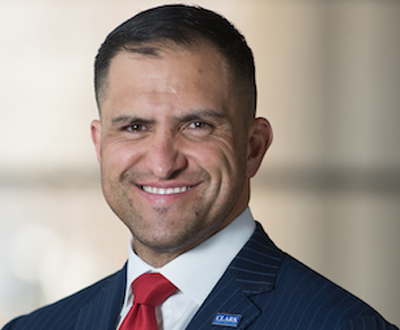 Originally from Mexico City, Carlos Gonzalez was visiting family in San Diego in December 1993 when he heard about SDSU and became interested in visiting the campus. This was in the days before the Internet and Google Maps. Wanting to learn more about SDSU, Carlos used the Yellow Pages to find the SDSU listing and address. He got a map and made his way to campus. His first memory of SDSU was walking across the footbridge on College Avenue and thinking how beautiful the campus was. As he walked by Student Services and into Centennial Walkway, he was impressed with everything from the architecture, to the layout of the walkway, to the landscaping. That first impression led him to enroll at SDSU in the Fall of 1994.

From the very first day of class, he felt welcome on campus. He had always been good in math/physics in high school and had a strong interest in construction. Realizing that engineering would be a great career pathway for construction, he majored in Civil Engineering. Within the first two weeks of being a student, his advisor told him about the Minority Engineering Program (MEP) in the College of Engineering, that has since morphed into the Math Engineering Science Achievement Program (MESA). He joined MEP where he utilized many of the program’s services including tutoring. Before long, the program hired Carlos as a student worker in the office and to do tutoring. According to Theresa Garcia, Assistant Dean for Student Affairs in the College of Engineering and former MEP/MESA Director, “Carlos developed a database on MS Access while he was a student in the program. That database was used from the mid-1990’s until just a couple of years ago. He really raised the bar for student success, kept us on our toes (in a good way), and was very inquisitive, caring, and helpful.” The MESA program allowed Carlos to work with other students and to develop strong friendships. He could see the successes of older students and several of those students served as role models to him. Carlos earned a bachelor’s degree in Civil Engineering and a master’s degree in Structural and Geo-Technical Engineering.

Carlos was active in Chi Epsilon and Tau Beta Pi but credits the Associated General Contractors (AGC) Student Chapter with providing very impactful student experiences. He served the organization as secretary, and later as president, during his time at SDSU. He noted that the AGC Reno Student Competition gave students an opportunity to work on a real-world engineering problem in a team setting.

His advice to students today is to stick with it. Engineering is not an easy curriculum, but the hard work will pay off in the long run. Engineering is a great career, especially in Construction Engineering, as you can see the fruits of your efforts for years to come. He highly recommends participating in the SDSU AGC Student Chapter. According to Carlos, being involved provides a lot of opportunity for connection to industry, which can be a gateway to an internship or first job.

An internship at Malcolm Drilling (which he learned about from a flyer in the hallway of the Engineering Building) turned into Carlos’ first professional job after he graduated. Today, Carlos serves as Regional Executive Officer and Senior Vice President, Western Region South for Clark Construction. He has been with Clark for 19 years.

As a recipient of two scholarships, Carlos says he feels a real responsibility to give back. “People did it for me and I’m happy to do it for others,” Carlos said. Another source of pride for Carlos is working with students and then bringing them on as interns and employees after graduation. Carlos said, “It’s great watching them advance in their careers.”

In addition to earning both his bachelor’s and master’s degrees at SDSU, Carlos also met his wife, Gail, on campus. Gail was working as an office assistant in the Dean’s Office when they met.

Carlos and Gail are Aztec Proud, and we are proud of them!

Please click on Carlos Gonzalez Where Are They Now for a downloadable PDF of this article.